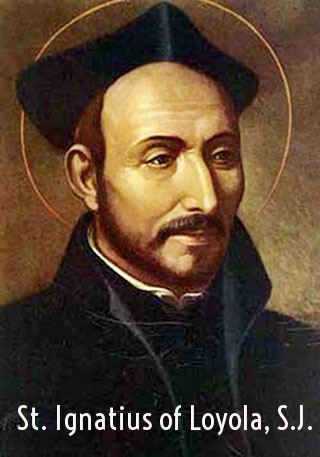 The Jesuit High School Saint Ignatius Scholar Program, established in 2014, is a merit-based tuition assistance program designed to attract and retain students of exceptional scholastic ability whose scores on the High School Placement Test (HSPT) are in the top 2% nationwide. In addition, qualified students will be evaluated on the basis of character, faith, service, and need.

To renew the award each year, an Ignatius Scholar must achieve the following:

St. Ignatius of Loyola, S.J. founded the Catholic religious order the Society of Jesus (Jesuits) in 1540.  Born Íñigo López de Loyola in 1491 in Spain, he was badly wounded in the Battle of Pamplona in 1521, and during his lengthy recovery from surgery he underwent a spiritual conversion which led to his experiencing a call to religious life and writing the Spiritual Exercises.

In 1539, with St. Peter Faber, S.J. and St. Francis Xavier, S.J., his former roommates from the University of Paris, St. Ignatius formed the Society of Jesus, which was approved a year later by Pope Paul II. St. Ignatius was chosen as the first Superior General of the order and invested with the title of Father General by the Jesuits.

St. Ignatius was beatified in 1609 and canonized in 1622. His feast day is celebrated on July 31. He is the patron saint of two Basque provinces in Spain as well as the Society of Jesus, and was declared patron saint of all spiritual retreats by Pope Pius XI in 1922.

St. Ignatius dedicated his life and the work of the Jesuits to Ad Majorem Dei Gloriam, A.M.D.G., “For the Greater Glory of God." In 1548 he founded the first Jesuit school in Messina, Sicily, launching 470 years of excellence in education in Jesuit schools throughout the world.

The Jesuits maintain hundreds of schools across the globe on six continents, including 60 secondary schools and 28 colleges and universities in the United States alone. More than 50 percent of Jesuit institutions in the U.S., including Jesuit High School of Tampa (founded in 1899), are more than 100 years old.

The distinctiveness of a Jesuit education stems from its deep-rooted history and a mission, established by St. Ignatius, that is grounded in faith and intellectual rigor. Since its beginnings in the 16th century in Sicily, Jesuit higher education remains committed to academic excellence, service, leadership, and caring for the whole person. Jesuit high schools embody a tradition of forming ordinary boys into extraordinary men.