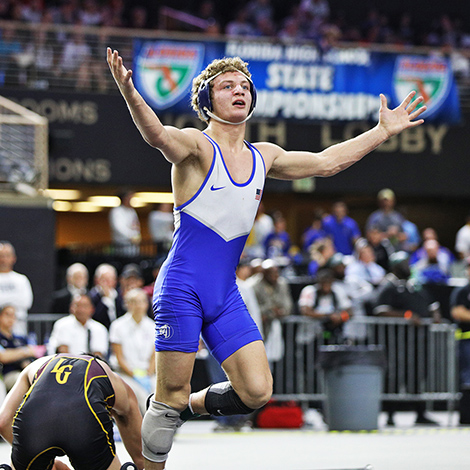 Jesuit wrestling has established itself as one of the premier programs in the state of Florida in the past dozen years and since 2015 under head coach Sal Basile.

In 2021, the program continued its championship legacy with five State finalists and two individual State titles, won by twin brothers Tom Crook '22 (138 pounds) and Jack Crook '22 (145). Both Crook brothers were nationally ranked in the Top 10, and Tom Crook was named Mr. Wrestling in Florida after capping off his third straight unbeaten season. He is Jesuit's first 3-time State Champion and the first Tiger to win Mr. Wrestling for all classifications.

In 2020, Jesuit wrestling claimed its first team State title with a victory at the State Duals Championship. In the Class 2A quarterfinal, the Tigers defeated two-time defending champion Lake Gibson 29-27, winning the final three matches for a dramatic come-from-behind triumph. Jesuit then blasted Fort Lauderdale St. Thomas Aquinas 71-6 in the final.

The Tigers also had four individual State Champions in 2020 (equaling the school record set in 2019) and finished as Class 2A State Tournament runner-up, close behind two-time defending champion Lake Gibson. From 2013-16, Jesuit placed in the Top 6 at the State Tournament, including a State runner-up finish in 2014 and 3rd place in 2016. Nine Tigers have earned 16 individual State titles since 2014, the year Austin Underwood '14 (University of Virginia signee) went undefeated on his way to capturing the Heavyweight crown.