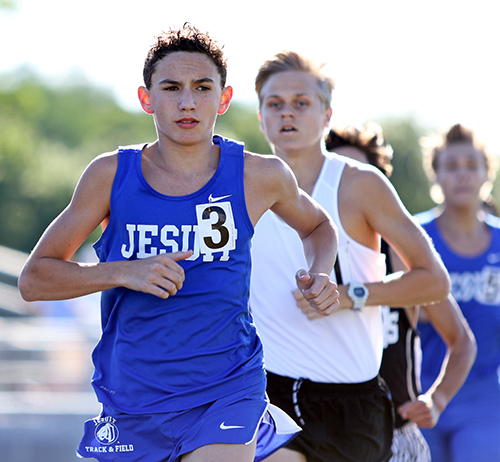 Jesuit track & field has a long and storied tradition of success - including a 2003 State Championship -  which has continued under head coach Andy Wood '92. Over the past 10 seasons, the Tigers have finished either first or second in the District every year. Jesuit finished second behind Hillsborough in 2019, featuring two individual District champions and advancing 17 athletes to the Region Meet. Individual District champions were Anson Rowe '20 (pole vault, 13 feet) and Lawson McLeod (mile, 4:31, pictured at right). Rowe cleared 13-6 at the State Meet, finishing 11th. Larry Hodges '19 took second in the shot put at Districts (45 feet, 2.5 inches), while Christian Jones '20 was the only Tiger to qualify in multiple events (long jump, 4x100 relay). Among many alumni who have gone on to participate in college track & field are Dante Newberg '15, who became one of the ACC's top decathletes at Florida State, and State Champion pole vaulter Nick Catchur '14 at the University of Miami. Wood was named the area’s Coach of the Year in 2014 by the Tampa Tribune.