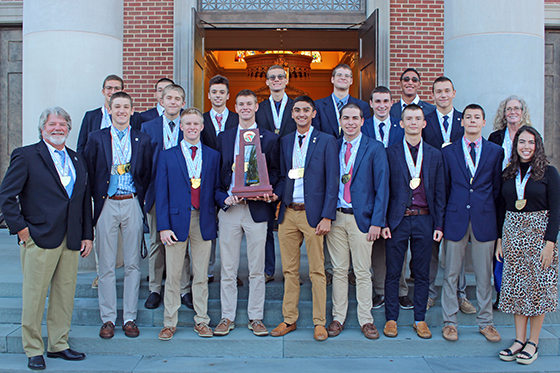 In the fall of 2017, Jesuit became the first Hillsborough County school to capture a swimming State Championship in 71 years.

In 2018, the Tigers did it again, repeating as State Champion. It is a feat achieved only one other time by a Tampa Bay area school, by St. Petersburg High nearly a century ago in the 1920s.

In 2020, Jesuit did it a 3rd time - State Champions. With three out of four State titles and eight consecutive years in the Top 3 at State, the Tigers now stand alone as the best swimming program in Tampa Bay area history.

In 2021, the Tigers finished as State runner-up while securing three State titles: two relay gold medals, the 400 freestyle and 200 medley, and Aiden Clements '23 earning the third title in the 100 backstroke. The 400 freestyle was swam by Clements, Liam Schindler '23, Jordan Jansen '23, and Brayden Hohman '23. The 200 medley was swam by Clements, Schindler, Erick Magalhaes '23, and Sasha Fiola '23. Both relays set new school-record times. With those three victories propelling Jesuit to the runner-up team result, it marked the eighth straight season the Tigers finished in the Top 3 at State, including the three State Championships (2017, 2018, 2020).

The 2020 season was arguably the school's best ever. The Tigers were unblemished, sweeping all of their dual meets plus the Tampa Bay Classic and District-Region-State. At State, two relays won gold medals: the 200 medley (Nick Shaffer '21, Liam Schindler '23, Erick Magalhaes '23, and Sam Prabhakaran '21) in school-record time, and the 200 freestyle (Prabhakaran, Geoff Trieloff '21, Schindler, and Shaffer). Shaffer (who signed with Florida Atlantic) also claimed individual gold in the 200 IM in school-record time and placed third in the 100 backstroke.

When the Tigers began their run of State titles in 2017, they were propelled to the 2A crown with silver medal results in three relays and Brendan Driscoll '19 claiming an individual State title in the 500 freestyle. Driscoll also earned the prestigious Hicks Award as the county's Outstanding Swimmer. In 2018 at State swimming, the Tigers earned 1st, 2nd, and 4th in the pivotal relays, while Driscoll repeated as State Champion in the 500 free and Jesuit won the State title again. In 2019, the Tigers won the City Relays title and went 8-0 in dual meets. Nick Shaffer '21 won four events at the Region Meet, while Anthony Kirchner '20 won three. Shaffer led the way at State with four bronze medals (200 IM, 100 back, 200 medley relay, 400 free relay) as the Tigers placed 3rd.

Under the direction of head coach Bill Shaffer since 1996, the Tigers have been one of Florida's elite programs for decades, producing numerous All-County, State Champion, and collegiate swimmers. Entering 2022, Jesuit has claimed a remarkable 25 straight District titles and 13 consecutive Region crowns. The Tigers were State runners-up in 2014 and '15 before winning the 2017, '18, and '20 crowns. They are 205-7-1 in dual meets under Shaffer. The recent success has been spurred by a series of outstanding swimmers. In 2015, Tommy Shaffer '16 (Army West Point), claimed the 100 freestyle gold medal at State and was named the county's Outstanding Swimmer. Byrne Litschgi '16 (University of Chicago) and Tommy Shaffer led two relays to gold at State in 2015, the 200 freestyle and the 200 medley, and the 200 free relay won gold again in 2016. Litschgi set four school records at the University Chicago in 2018-19 and won the NCAA DIII National Championship in the 200 backstroke. In 2014, Austin Sellers '15 (University of North Carolina), capped a historic season at the State Meet with three individual silver medals and a gold, winning the State title in the 100 breaststroke and coming within 0.18 of a state record. In 2016, Chris Swanson '12 became the University of Pennsylvania's first-ever collegiate National Champion, winning the 1,650 freestyle NCAA DI crown. Driscoll (Duke University) capped off his Jesuit career with multiple Olympic Trials-qualifying times at Junior Nationals in the summer of 2019.