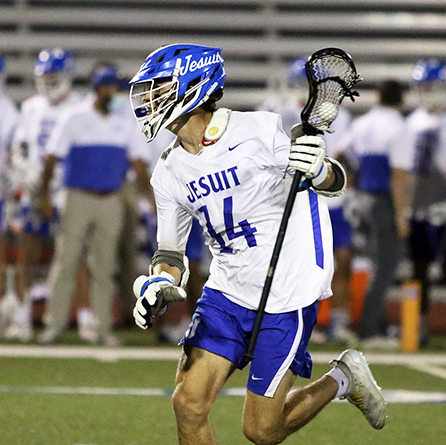 The early history of the Jesuits in North America is intertwined with the development of lacrosse. Originated by native North Americans, in 1636 the Jesuit missionary Jean de Brebeuf, S.J. adapted lacrosse for French pioneers in Canada. A few centuries later in the spring of 2012, after several years as a club team, Jesuit High School lacrosse began FHSAA play as a Varsity sport.

Charlie Cummins enters his second year as head coach in 2021 after the 2020 season was cut by COVID-19. In 2019, the Tigers claimed their second consecutive District Championship, making it five District titles in eight years of FHSAA play. Jesuit defeated Berkeley Prep 9-3 in the 2019 District Final (the Tigers defeated Plant in the 2018 District Final, 9-5) and then went on to beat Steinbrenner (17-5) and Newsome (7-6) to advance to the Region Final, before falling to Orlando Bishop Moore. Casey Fuss '20, Cade Myers '19 and Kenny Lane '19 concluded the 2019 season with All-Region team recognition.