Based on the latest hurricane forecast and guidance from local authorities, Jesuit High Schoolâs campus will be closed from Tuesday, September 27 through Thursday, September 29. There will be no school activities these days. On Tuesday, classes will be conducted via asynchronous eLearning through Canvas. Assignments will be posted to course Canvas pages. Students who are able to access Canvas should check in with each class to keep up with content and work. Students who are unable to log on to Canvas due to hardship or circumstances caused by the storm will not be penalized. Tuesday afternoon, based on the projected trajectory of the storm and its effects, the school will provide subsequent communication regarding eLearning expectations for Wednesday and Thursday. Jesuit will continue to provide updates to parents via email, as well posts to the school website (www.jesuittampa.org), and social media (Facebook, Twitter, and Instagram).

In the coming days, let us keep one another in our prayers and pray for the safety of those in the path of the storm.
previous next

<Back to News
An Extraordinary European Pilgrimage

"In the Footsteps of St. Ignatius" was the extraordinary path followed by the 88 Jesuit students plus 22 chaperones during the two-week European Pilgrimage in late July.

They traveled through historic Paris and Rome for several days each before completing their journey, as many Jesuit High School pilgrimages have before, in the foothills of the Alps in Austria.

"Our 2022 European Pilgrimage was an unforgettable relaunch of one of Jesuit's finest summer traditions," said Jimmy Mitchell, Jesuit's director of campus ministry.

Jesuit's first large, school-organized pilgrimage abroad since 2019, it was filled each day with visits to a vast array of historic locales, religious shrines, and beautiful sites, which created many powerful and reflective occasions. All of which resulted in an exhilarating and uplifting experience. (Scroll to the end for the large photo slideshow and videos.)

Ultimately, over the course of two incredible weeks, the pilgrims further developed in their brotherhood and faith, and they achieved the objective of pilgrimage: transformation.

They were divided into 11 groups with 10 per group – 7 current students and one Class of 2022 graduate, led by an adult chaperone along with a young alumni chaperone. After a connector in Frankfurt, they began their journey on July 17 in Paris, where Ignatius of Loyola had arrived alone on foot nearly 500 years prior, in 1528, to begin the midlife university studies that helped him shape the plan for what would become the Society of Jesus – the Jesuits.

That first night in Paris they celebrated Mass at Saint-Paul-Saint-Louis, the first of many spectacular places of worship along 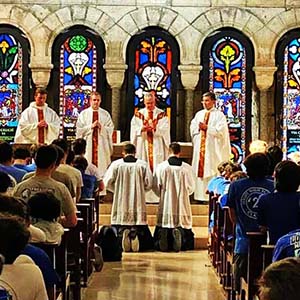 the pilgrimage. The next evening, following the Ignatian Walking Tour and tours of Sainte Chapelle, The Louvre, and Martyrium Chapel, they celebrated Mass at The Basilica of Sacré-Cœur de Montmartre. There, the two Jesuit scholastics serving as chaperones on the trip, Mr. Connor Smith, S.J., and Mr. Peter Bell, S.J. renewed their vows.

"The vows are what animate our life as Jesuits, and being able to renew our vows one mile away from where Saint Ignatius and his companions took their first vows is a true grace from God, a dream come true," Mr. Bell said. "The icing on the cake was being able to do in front of all the students, to give witness to what we are all about, laying down our lives for Jesus Christ."

The Mass resonated with the pilgrims.

"The Mass in the crypt of the Sacré-Cœur Basilica was among the best, if not the best, Mass I have ever been a part of," Kevin Doherty '23 said. "From the beauty of the crypt walls, to the way our voices filled the room with prayerful song, I have never enjoyed a Mass more in my life."

The time in Paris also included a river cruise down the Seine, a visit to the Chapel of St. Vincent de Paul, climbing the Eiffel Tower. and a day trip to Cathedrale Notre-Dame de Chartres.

After four days in Paris, on July 21 the pilgrims boarded two flights at Charles de Gaulle Airport bound for Rome. There, they celebrated Morning Prayer at St. John Lateran Basilica (considered the mother church of all Catholic churches), ascended the holy stairs at Scala Santa, and celebrated Mass in St. Peter's Basilica.

"Having the opportunity to pray in front of the remains of the St. Peter was once-in-a-lifetime," Doherty said. "The peace of my prayer in those few moments is something I'll never forget."

It was one evening in Rome, during an "elevated" group conversation at dinner, that Mitchell's group had a remarkable encounter with a random stranger who was on vacation from the U.S. Mitchell and Jake Killian '24 recounted this extraordinary and impactful chance meeting at Convocation in early August, click here for the video.

When in Rome they visited the Colosseum and the Basilica of St. Francis in nearby Assisi, and also, of course, the Gesù, the 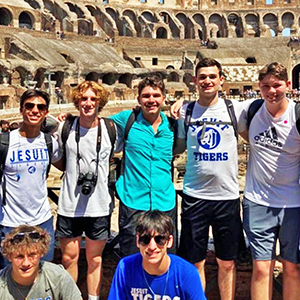 mother church of the Jesuits, where they celebrated Mass. Completed in 1584, the Gesù has a side chapel that contains the tomb of St. Ignatius.

"Although this was a pilgrimage in the footsteps of St. Ignatius, thus having a strong religious intention, not every member of our group had the same devotion to the faith," Doherty said. "Some people had none at all. However, the openness and willingness to grow and understand the faith seemed to spread amongst every pilgrim and grow as the trip progressed."

From Rome they flew to Vienna on July 26. Their time in Austria was designed for reflection, rest, and recreation in an ideal location for such, at the nearly 700-year old Karthause in Gaming, in a picturesque setting near the Alps. Gaming and the surrounding areas of Austria have been a place of reflection, worship, and adventure as the final stop for many Jesuit pilgrimages.

The hills of Austria were alive as the pilgrims visited famed Salzburg and the historic 440-year old Mariazell Basilica, while also hiking, swimming, and caving throughout the region.

"I'm not usually not the claustrophobic type, but something about the damp, dark cave in Gaming pushed me out of my comfort zone," Doherty said. "I've never felt more accomplished than after army crawling my way through an almost 45-degree downward sloped crack that barely fit my head."

The entire pilgrimage took place during the final two weeks of the Ignatian Year, a Jubilee Year of Faith commemorating two events in the life of St. Ignatius: the 500th anniversary of his Conversion and fourth centenary of his Canonization.

"As we walked in the footsteps of St. Ignatius while closing out the Jubilee Year, students and faculty alike encountered the profound beauty of the Catholic faith in Paris, Rome, and the Austrian mountains," Mitchell said. "It certainly didn't hurt that 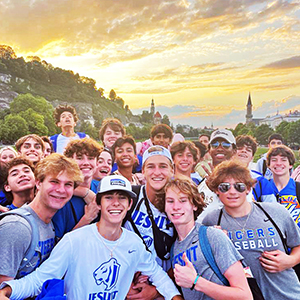 we enjoyed many incredible meals and unexpected adventures in between all the grace-filled visits to famous chapels, basilicas, and shrines.

"From praying in the very chapel in Paris where Ignatius and his early companions pronounced their first vows, to  celebrating Mass in the Church of the Gesù in Rome where Ignatius is buried, the pilgrimage was a transformative experience from start to finish."

Added Doherty: "This pilgrimage was transformative because it showed me beauty, history, and awe-inspiring things that made me more proud to be a member of the Jesuit community and more importantly more proud to be a Catholic. I hope to take my zeal from this pilgrimage and spread it to my community, inspiring and helping others to understand and appreciate the faith more than before."

Since the start of the school year, the Jesuit student body has experienced three unique Convocation presentations about the European Pilgrimage. Scroll below to view Mitchell and Killian talking about the amazing impact a Jesuit small group in Rome had on a complete stranger; to view a presentation from Menendez about how discomfort on the pilgrimage led to growth and change; and to view Dante Searls '24 telling the story about how he was transformed during the pilgrimage.

"It goes without saying," Mitchell said, "that we're already excited to begin planning our next big pilgrimage for the summer of 2023."

Jesuit's tentative plan for summer 2023 is a Marian Pilgrimage to Europe that would include visits to London, Lourdes, Loyola, Krakow, Gaming, and Vienna. It would be 16 days, spanning the last week of June and first week of July.

View below a vast photo slideshow from the 2022 European Pilgrimage, and below that are the videos of Mitchell/Killian, Menendez, and Searls.