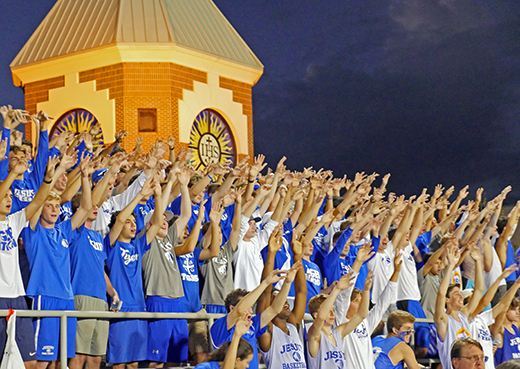 Jesuit High School's tradition of excellence in athletics is second to none in the Tampa Bay area and among the very best in Florida every year. The Tigers perennially rank at the top of the Florida High School Athletic Association's athletic and academic rankings among all Florida schools.

In 2020-21, Jesuit led the way, yet again, in Class 5A of the Florida High School Athletic Association's All-Sports Award rankings, a.k.a. the FHSAA Floyd E. Lay Sunshine Cup. The Tigers tallied the second-most points in the state (114), following Class 4A Jacksonville Bolles (118).

In 2019-20, Jesuit repeated as State Champion in the FHSAA's All-Sports Award rankings, not only in Class 5A, but over every school in Florida, securing 101 points in the FHSAA's scoring system to win by 21.5 points over runner-up Lake Highland Prep.

The Tigers annually rank at or near the very top among all FHSAA boys sports programs in the All-Sports Award rankings. The past eight years, since 2013-14, Jesuit has finished No. 1 three times statewide and never below 6th. Among Jesuit's 12 FHSAA sports programs, the Tigers have claimed District titles in 71 of 92 opportunities, a 77% clip, during that time. (Jesuit's four spring sports did not complete their seasons in 2020 due to COVID-19).

The Tigers also excel annually in the FHSAA’s Academic Team Champion Award (ATC) results. Since 2013-14, Jesuit has finished 1st or 2nd annually in its overall classification in the ATC standings among boys sports programs. Every year during that time, at least one Jesuit team has ranked No. 1 in its respective sport in the ATC standings, and several years multiple teams have ranked 1st, including the basketball, football, soccer, wrestling, swimming, and bowling teams.

Jesuit’s athletic program, teams, and individual student-athletes have earned many awards and honors during the long history of the school. Below is a listing of some of the prominent program and team awards:

Jesuit High School has more than 100 years of athletic excellence. Since humble beginnings at the turn of the 19th century, Jesuit's athletic programs have developed, through the decades, into nationally recognized championship contenders.

1959 basketball - No. 4 is professional baseball legend Lou Piniella, who was a basketball star at Jesuit.

Running back Leonard George - 1968 State Champion football. The first African-American to receive a scholarship to play at the University of Florida.

Coach Paul Straub during the construction of Jesuit's gym in 1961. Straub served Jesuit for 42 years as coach of several sports, and also as athletic director, alumni director, and teacher.

1980 baseball. Dave Magadan is in the back row, fifth from the right. Magadan spent more than a decade playing for several MLB teams.

Alumni Track & Field at Corral Memorial Stadium features a state-of-the-art synthetic playing field, which was resurfaced in 2015, and rubberized track surface. The playing field is used by the football, soccer, and lacrosse programs.

Paul Straub Field at Hyer Family Park was named field of the year by the National High School Baseball Coaches Association. Its dimensions are 320 feet down the lines and 380 to center, and it is perhaps the finest athletic facility in the Tampa Bay area.

The south side of the Al Lopez Sports Complex overlooks Alumni Track and Field. The Oliva Weight Room inside the complex is equipped with elite, well-maintained equipment and features high, arched windows that overlook Alumni Track and Field and Corral Memorial Stadium, providing an inspirational view of the playing fields and stadium area. The Tigers' Den on the south side serves as the athletes' entrance to the locker room and training areas.